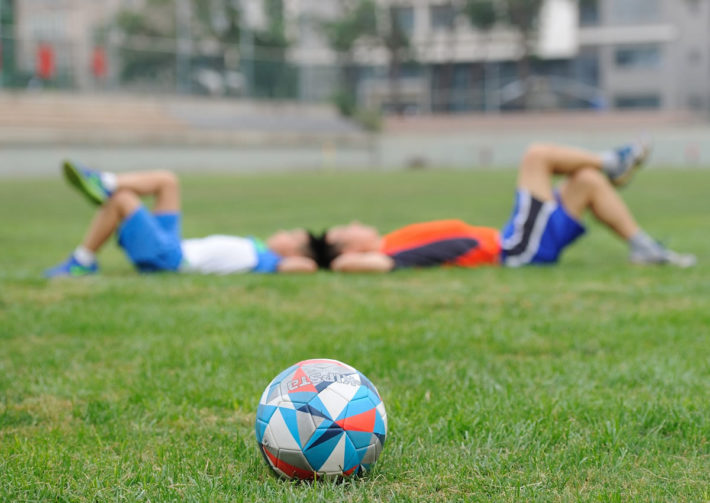 I often find myself recommending to parents that their troubled children should play a team sport. It isn’t the cure-all, and there are usually a multitude of other aspects to improving your child’s mental state. But team sport brings opportunities for growth, change and maturity that is often accessible, affordable, convenient and sensible. It’s also something that most parents readily agree to, because it’s hard not to see the value that it can bring. You are never really too old to start playing a sport, but earlier is usually better! The ridiculous thing is that I didn’t start playing a team sport until I was well into my 40’s. I chose a crazily difficult sport and learning it was the hardest thing I’ve ever done. But it was – and still is – a lot of fun!

Learning the rules of a game and developing the skill that you need in order to play that game can be challenging. Children – and adults – with certain emotional and behavioural problems often resist this challenge because it is difficult, frustrating and it can make them feel like a failure. It’s much easier in the short term to lie around with your iPad and play games that offer instant gratification and don’t require any energy or fitness. Spending the afternoons alone in front of a screen might be relaxing and children often opt for that if it’s available to them. Some kids would rather not brave the elements (scorching heat, cold or gale force winds) or risk breaking bones on the field, running around with a bunch of other people, often getting into high adrenaline, high conflict situations, losing, making mistakes and feeling like a complete idiot. But playing a sport provides you with the opportunity to master a skill. That is highly rewarding and extremely satisfying. Sport gives you a chance to work on your strategy, your technique, and most importantly, your capacity to work together with other people. Team work  is about co-operation. Playing in a team can be very upsetting and it can end in tears over and over again. But the better you are at being a team player, the more you’ll be valued, not only in the sporting world but in your life. Teamwork is a skill that you’re better off having.

For me, the greatest challenge about my midlife team sport endeavour has been learning how to lose without feeling totally and completely gutted! Competitive sport values winning, even when everyone pays lip service to it being about the game and not whether you win or lose. The truth is that nobody likes too lose. Some people just handle it better than others. For someone who has psychological vulnerabilities, losing is a devastating narcissistic injury and it can make you feel worthless, stupid and useless. For a disturbed child who already has a fragile self esteem, this might be a bit too much to handle. Coaches and teachers need to be very sensitive to this and it’s probably the reason that some schools shy away from competitive sports. It’s certainly a reason to emphasise the qualities of the game that are not about winning.

Good coaching is essential to develop an understanding of the sport.  You can only feel confident and master the team sport if you grasp the complexity of it. A coach teaches you to notice and learn from your mistakes and to manage the stress of the game. Coaches are powerful role models and influencers and they often play a role that goes well beyond that particular sport. They need to be wisely chosen.

Lots of parents want and expect their children to play sport but some kids refuse. There isn’t an easy answer to this because in order to benefit from a team sport, I suspect you have to love it. Or at least you have to be quite committed, focussed and willing to suffer through the less appealing aspects of it. Perhaps, if you have a reluctant child, you can offer him or her the opportunity to learn a skill of some kind, even if it’s an individualised one. But keep trying with the team sport. Mostly, children follow the example of their parents. If you spend weekends watching and playing sport with your kids – even informally on the beach, they are more likely to do the same. If you don’t then perhaps it’s time to start.