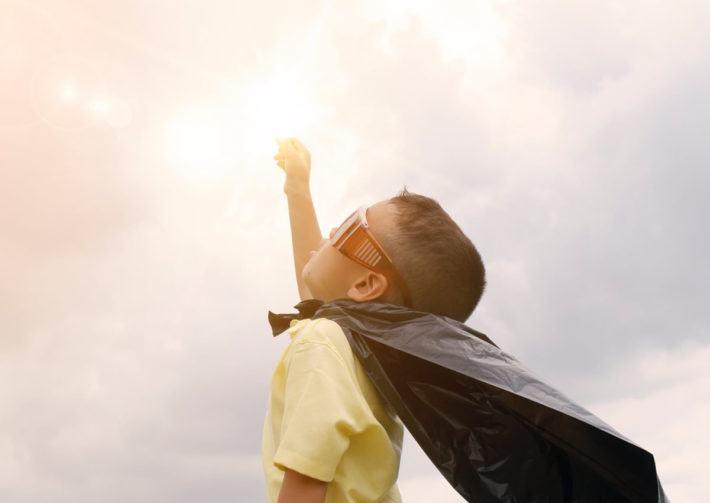 Eight year old Shaun seems extremely confident and self-assured. He tells everyone that he is a genius and the cleverest boy in the country. He is desperate for approval by others, and he feels devastated when he is faced with any kind of criticism. He tries very hard to be the centre of attention.

High self esteem and narcissism can appear the same, but they are entirely different issues. Some people link high self-esteem to pride, egotism, arrogance, conceitedness and a sense of superiority.  But true self-esteem is none of these things. Narcissism is actually a defence against low self-esteem or a feeling of worthlessness. In other words, a child such as Shaun hides his real feelings of being ‘a loser’ behind the mask of narcissism. He tries to make himself big and important whereas he actually feels small and insignificant.

In most circles these days it has become something of an insult to call someone a narcissist. It is usually not meant kindly. But what does narcissism really mean?

The Diagnostic and Statistical Manual of Mental Disorders describes narcissism as a pattern of grandiosity, a need for admiration and a lack of empathy. It explains that these individuals are very sensitive to criticism or defeat. They believe that they have special, unique qualities or that they are gifted in some way. They feel a great sense of entitlement and they can be somewhat patronising and undermining of others.

Phyllis Beren, in an article called Narcissistic Disorders in Children published in “Psychoanalytic Study of the Child” in 1992, describes childhood narcissistic behaviour as grandiose and omnipotent. But rather than being an authentic reflection of high self-esteem, it is the child’s attempt to compensate for feelings of vulnerability and a fragile sense of self. These children, writes Beren, are more vulnerable and more dependent on outside approval. They are dependent on the admiration of others in order to feel good enough. They feel easily injured and when they do feel hurt by someone they often react with anger and outrage, as in the following case example. This means that it can be quite difficult to set limits or give negative feedback to a narcissistic child without causing her a great deal of distress.

Sally, aged 9, appears to be a very confident child and her parents and teachers have high hopes for her. But she is boastful and she can be unkind to children who are less popular or less attractive than her. She likes to be the leader of the pack at school and she has a clear desire to be liked and admired by others. She becomes intensely angry and hurt when friends, parents or teachers do not do what she wants them to do or if they criticise her in any way. She does not like to be overshadowed by the achievements of other children. She wants to be the best.

Narcissistic children, writes Beren, lack empathy for others. A narcissistic child might be very critical of her friends, perhaps in attempt to feel better about herself. She might feel too ashamed of her own shortcomings to face up to them honestly. She tries to hide her “failures” by either lying about them or pretending they aren’t there. Feelings of boredom can be linked to feeling empty. This boredom can cause a narcissistic child to look for exciting, new ways to liven things up. She might want to go on constant adventures or she might always beg for new clothes and toys.

So what can parents do to prevent their children from wearing the mask of narcissism? The answer, of-course, lies in the importance of fostering a healthy, realistic self-esteem from an early age. Children with a healthy self-esteem do not need to mask their feelings of inferiority by using a narcissistic defence.

Low self-esteem and the narcissistic mask

Robert Reasoner, in a paper about the meaning of self-esteem writes that self-esteem is strongly connected to a sense of competence and worthiness. In his view, feeling worthwhile might be the psychological aspect of self-esteem, while competence might be considered the behavioural or sociological aspect of self-esteem. Psychoanalysts such as Samuel Abrams, in a paper published in 1990 in the Psychoanalytic Study of the Child entitled Orienting Perspectives on Shame and Self-Esteem, believes that low self-esteem is linked to early relationships with the people closest to the child. These early relationships (for example, with parents) become internalised within the mind of the individual and they remain there throughout life. So children whose parents treat them with contempt and disrespect are likely to grow up feeling that they are worthless. They do not like themselves.

According to Clive Hartsman, a Cape Town clinical psychologist, we are all narcissistic when we are babies. This is normal and appropriate. Babies characteristically feel omnipotent…the centre of the universe! That is how they should feel. Hartsman says that parents have an important role of “mirroring” their children’s powerfulness, rather than undermining it. Young children need their parents to mirror or reflect back to them who they are and how they feel about things. When parents fail to do this, children might go to great lengths to be noticed or to look for attention. If they are not mirrored enough, they often go to great lengths to find someone to be a mirror for them. If they can’t get it from their parents, they will try to get it from others. If it doesn’t work, they will try harder and harder to be noticed.

Benny, aged 10, is the class clown. He is always doing outlandish things at school and he takes huge risks, jumping out of windows, playing dangerous tricks on teachers and so on. He takes great pride and satisfaction of getting the attention of other children and of impressing them with his dare-devil games. He enjoys the fact that he keeps getting called to the headmaster’s office and he likes the idea that the other children think he is brave and reckless.

What Benny is really saying is, “Look at me! I really am important. I really am worth something! Aren’t I?”

According to Hartsman, it is a parent’s job to manage early normal narcissism in babies and young children in a way that doesn’t disempower or humiliate the child. Gradually, children realise that the world doesn’t revolve around them. They have to relinquish the idea that they are brilliant masters of the universe. This can be very painful but it has to happen. Reality starts to dawn, with time, on its own accord. Children need their parents to support them through this difficult realisation. They need their parents to help them to understand the real world and their place in it. This needs to be done gently. You don’t need to tell your young child that he isn’t Superman. But you can empathise with him about how much he really wants to be a big, strong hero. There are times when you won’t be able to give your child everything that she wants. This is good for her in a way because it helps her to grow up and realise that she cannot control the world and everyone in it. She cannot always get her own way.

The way children are handled, spoken to, looked at and related to by their parents influences their self-esteem. Children with high self-esteem generally feel valued by their parents. They know that their parents admire and love them. The spark in the eye of a proud parent is nourishing for a child’s self-esteem. This kind of attention and sensitivity helps children to see that they are worthwhile and important. It also gives them the confidence to discover who they really are. They will learn that they do not have to be or do certain things in order to be acceptable and worthwhile. They will discover that it is the essence of who they are that makes them worthwhile. This will make their lives considerably easier as they grow up.

Robert Reasoner writes that  “healthy” self-esteem refers to realistic and accurate positive appraisals of the self. Unhealthy, inflated self-esteem – narcissism –  involves insensitivity to others, excessive preoccupation with the self and one’s own image. You will recognise the difference between high self-esteem and narcissism by looking at how realistic your child’s ideas are about herself. Narcissism is about overvaluing the self in order to compensate for a low self-esteem. High or healthy self-esteem is a realistic, positive appraisal of the self. The hard truth for narcissists is that superheroes and masters of the universe are not real. Narcissistically-inclined children often believe – or wish – themselves to be the biggest and the best, but in the end, we are all just people. Nothing more. Nothing less.

Possible signs of narcissism in children

How to boost your child’s self-esteem